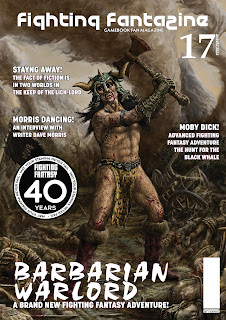 In time for the 40th anniversary of Fighting Fantasy...

Issue #17 is now available for download from the site: www.fightingfantazine.co.uk

104 pages of gamebook goodness. As usual, feedback is appreciated!
Print on demand version will be available soon!
Posted by Alex at 00:56 1 comment:

Email ThisBlogThis!Share to TwitterShare to FacebookShare to Pinterest
Labels: Issue 17 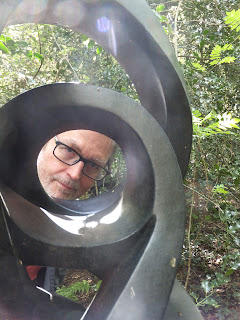 What do you consider Blood Sword 5E to be like in terms of flavour, atmosphere and playability?

I’m told the label is ‘grimdark’, but I don’t really follow fantasy and science fiction so I’d hesitate to try and define that. I can talk about the flavour of Legend from Dragon Warriors, which is bleak, unsentimental, unheroic – it’s the medieval world the way people at the time imagined it to work. I’m currently designing a new roleplaying game, Jewelspider, which is the successor to Dragon Warriors and steers even more into that low-fantasy style. 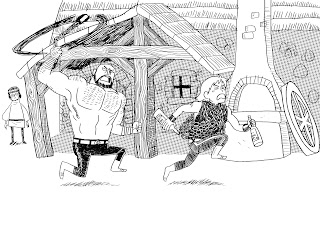 It might be wiser to start with some advice on where not to eat. Recently, several new eating establishments have opened their doors to customers eager to taste the renowned Mutton Fish. Such places should be avoided, as the fish they sell is not only shockingly expensive but also highly addictive. Get hooked on this fish, and you’d need a hoard of treasure like the Mungies’ gold just to cover the cost of your meals.

The Fact of Fiction - Sneak Peek 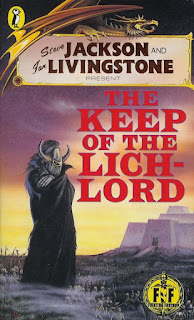 Another sneak peek, this time from "The Fact of Fiction" article on The Keep of the Lich-Lord.

The hero prepares to do battle with a pirate Ogre and Orc.

n In the Foreword to the Fabled Lands edition Dave Morris notes that the:

“setting took its cue from 1970s Dungeons & Dragons, with elves and dwarves and ‘halflings’ in every town and tavern, and orcs as the axiomatic bad eggs … there are cultish alignments with Good or Evil - and Chaos too, though it’s Gygax’s reductive, mankind-behaving-badly take on Chaos rather than the primal pitiless force of mind-gnawing existential dissolution evoked by Mike Moorcock.”

All of which is a roundabout why of explaining why the Chaos Pirate Ogre and Chaos Pirate Orc here become two generic pirates in the Fables Lands edition to avoid the alignment and race biases. Other instances of this tweak can be found at paragraphs 11 (no mention the pirate alignment with Chaos), 15 (the Chaos Knights are now the Knights of Nagil), 22 (the Chaos fleet is the Reaver fleet now), 36 (the bald man, Orc, and Goblin pirates become a bald man, a man with jaundice, and a southern tribesman), 37 (the pirates again change from a mixture of men, Orcs, Goblins, Hobgoblins, and Ogres to nomads of the steps, Akatsurese, Sokarans, and tribes-men from Smogmaw and unmapped southern hinterlands), 38 (Chaos Gods become Old Gods), 58 (Chaos Shaman is now just a Shaman), 97 (where Grom the Ogre is now Grom the Gutcrusher), 151 where the man and Hobgoblin Chaos Pirates become a man called Yahoo and woman from the Innis Shoals called Termagant, 201 where the buccaneers or Chaos pirates become ordinary pirates, and 381 where again Chaos pirates become ordinary pirates.

Email ThisBlogThis!Share to TwitterShare to FacebookShare to Pinterest
Labels: Issue 17, Peek, The Fact of Fiction, The Keep of the Lich-Lord 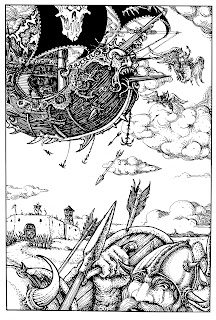 Here's a sneak peek at the art and text of the next mini adventure in issue #17...

Zharradan Marr’s army of legionaries is to be found at the Testing Grounds, a walled compound near the village of Coven, and is comprised of well-trained Orcs, Rhino Men and other races, who swiftly move to engage your horde in battle. At the same time, sailing over the Forest of Shadows like a great black cloud, comes the mighty flying ship, the Galleykeep, flanked by archers riding Tooki War-Griffins. On its command deck can be distantly seen several robed figures and what appears to be a large, man-sized mirror.

YOU are the chieftain of a tribe of Flatland Barbarians, feared marauders of the eastern steppes, and the spirits of your Ancestors have decreed a quest! Together with your band of bloodthirsty warriors you must raid the rich western lands of Allansia in an epic invasion of carnage and looting. Will YOU be the greatest BARBARIAN WARLORD of them all? 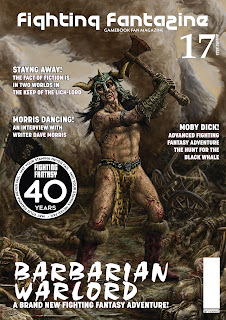 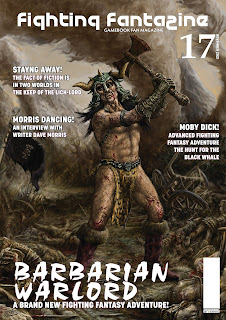 Just a quick blog post to say we're still around and working on issue #17!
Posted by Alex at 14:56 3 comments: 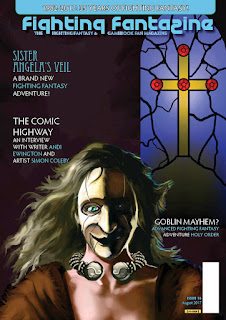 Issue #16 is now available for download from the site: www.fightingfantazine.co.uk
82 pages of gamebook goodness. As usual, feedback is appreciated!
Posted by Alex at 19:37 No comments:

Email ThisBlogThis!Share to TwitterShare to FacebookShare to Pinterest
Labels: Issue 16 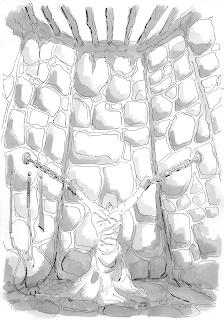 Here's a sneak peek at the art and text of the next mini adventure in issue #16...

The scene inside the room both surprises and sickens you. You are in the convent misericord, an area set aside for the sadistic punishment of members of the Order who are perceived to have “gone astray”. The floor is the same bare stone that the earlier parts of the building were built in, but the walls are fitted with manacles and vicious leather whips with knotted ends hang from loops set into the mortar between the stones of the walls. On the far side of the cell, shackled to a fixing post on the wall and facing away from you, is a human female form, stripped down to the waist, her bare back scarred by several vicious welts. As she hears you move, she speaks out, begging you not to flog her again. In your most reassuring tone, you quietly explain that you are not here to hurt her and the girl begins to sob as she requests that you untie her bonds.


Hidden high in the Moonstone Hills lies an ancient Convent, a site of pilgrimage for those who wish to view the mysterious relic of Sister Angela De Culpa. But, recently reports have come as far south as Salamonis that the relic has gone missing. YOU must journey to the Convent, gain entry, then negotiate whatever pestilence has overcome the building to unravel the secret of the missing relic known as Sister Angela’s Veil.